Steven Willey, M.D.
Print for your next doctor visit

The bioactive ingredients in the StayLo supplement are extracted from the leaves of the white mulberry plant (Morus alba) through a proprietary extraction and standardization process.  This process concentrates the bioactive iminosugars in mulberry leaves to ~8% of the total weight of the extract, which is approximately 50x greater than found in unprocessed mulberry leaves.  Iminosugars in the supplement are sugar analogues similar in molecular structure to glucose.  Taken orally, the iminosugars in the supplement act in the small intestine to transiently bind enzymes that break down carbohydrates including starch, sucrose and other common sugars.  This reversable, competitive inhibition of  a-amylase, a-glucosidase, sucrase, and other carbohydrate-digesting enzymes results in a significant reduction in postprandial plasma glucose and insulin levels.  In clinical studies, the StayLo supplement was not accompanied by gastrointestinal distress in excess of the placebo group.  In six clinical studies with healthy individuals the supplement has been demonstrated to reduce peak postprandial levels of both glucose and insulin by a mean of ~40%.

StayLo is an OTC nutritional supplement that contains an extract from the leaves of white mulberry plant (Morus alba). This extract contains concentrated levels of carbohydrate-digestion-inhibiting alkaloid imminosugars.

The final mulberry extract is standardized to contain a minimum of ~8% iminosugars by weight. This concentrated iminosugars formula has been demonstrated in multiple clinical studies to produce a mean ~40% reduction in postprandial plasma glucose and insulin compared to placebo. This effect is achieved with an oral dosage of 250mg of the mulberry concentrate (one capsule) 10 minutes before a carbohydrate-containing meal. 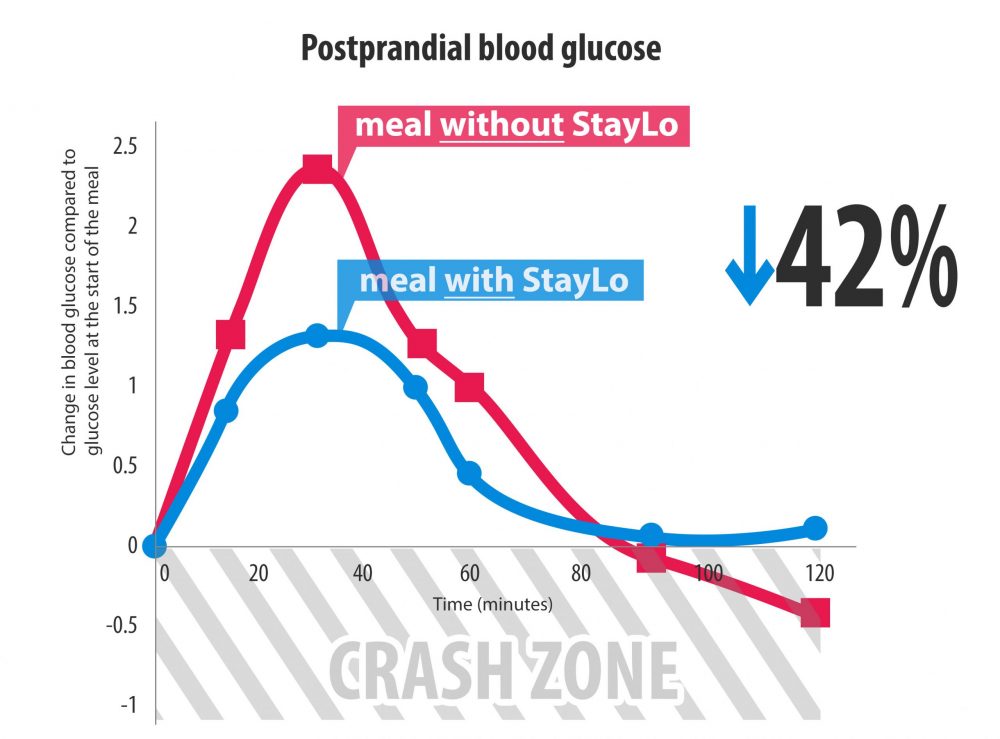 Double-blind, placebo-controlled study of postprandial glycemic and insulin response to a 75g sucrose challenge consumed with and without the StayLo supplement. Placebo group in red. Supplement group in blue. 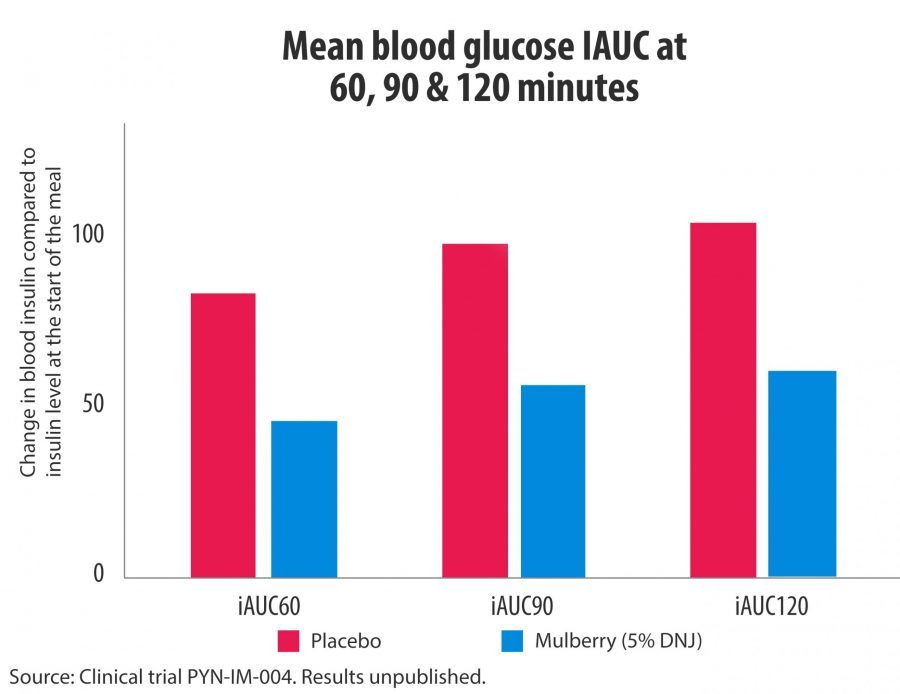 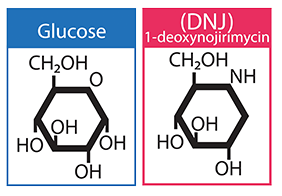 Enzyme inhibition is caused by mulberry derived iminosugars which are sugar analogs containing a nitrogen rather than an oxygen in the ring structure.  This structural similarity to glucose allows iminosugars to competitively, reversibly inhibit the digestive enzymes mentioned above, thus reducing the cleavage of bound glucose, preventing its absorption in the small intestine. Undigested carbohydrates, primarily di-saccarides, presumably pass to the large intestine where they are expected to be fermented in a prebiotic fashion. 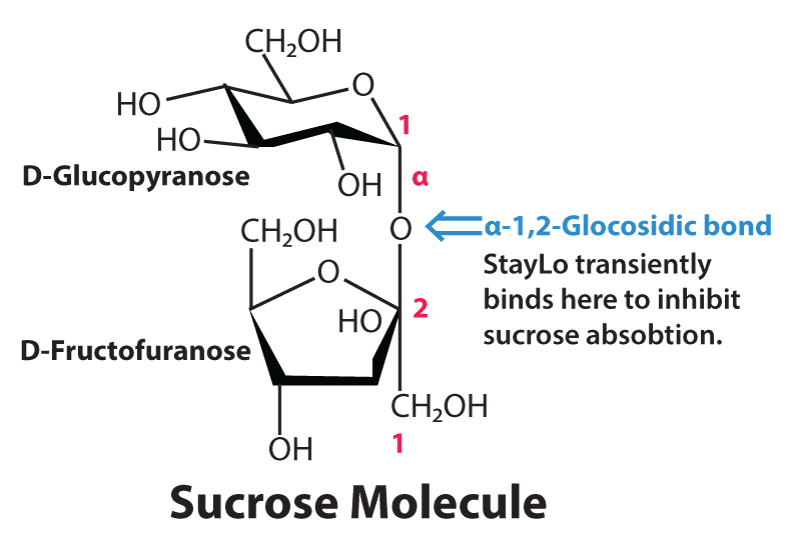 Two of the most studied iminosugars from mulberry are fagomine and 1-deoxynojirimycin (DNJ).  DNJ is released from enzymes it binds approximately 60 minutes after ingestion and is eliminated rapidly through the urine. DNJ is otherwise metabolically inert and not metabolized.

The StayLo supplement inhibits the breakdown of starches, sucrose, maltose and trehalose but does not inhibit the absorption of monosaccharide sugars since they are already in their simplest form and do not require enzymatic cleavage for digestive absorption. It does not inhibit the absorption of high fructose corn syrup because high fructose corn syrup is an inverted sugar syrup with the glucose-fructose bond broken in production, and thus subject to rapid intestinal absorption without enzymatic cleavage.

Consumers of the supplement have reported enhanced satiety between meals which could be due to the undigested nutrients triggering the release of satiety hormones, much the same way that undigested fibers do.

In clinical studies the mulberry ingredient caused no increase in gastrointestinal side effects compared to the placebo.

White mulberry leaf has a long history of safe use as both a food and a medicinal herb.  StayLo contains a concentrated version of this traditional mulberry remedy.  The supplement’s concentrated mulberry ingredient is GRAS (Generally Recognized As Safe) in the United States for use in foods, beverages, and nutritional supplements, based on scientific procedures and corroborated by a history of safe use.

StayLo’s concentrated mulberry ingredient has been tested in multiple human clinical studies. Study results have consistently confirmed its efficacy.   As noted, approximately 40% mean reduction in postprandial glucose and plasma insulin has been confirmed across clinical trials, although results vary among individuals.

StayLo is most effective when taken approximately 10 minutes prior to a meal.  This provides sufficient time for the capsule to dissolve and the mulberry nutrients to reach and bind enzymes in the small intestine before the starches and sugars from the meal arrive in the small intestine. The supplement should only be used as directed on the bottle label below. If any adverse effects occur, use should be discontinued and a qualified healthcare professional consulted. 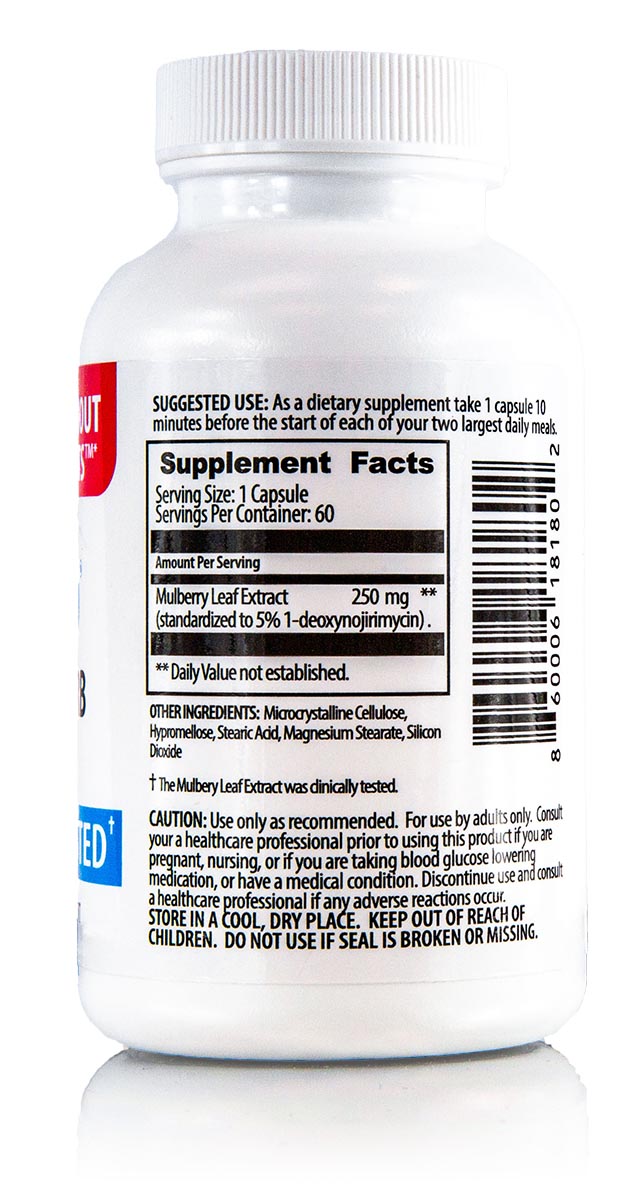 This website does not provide medical advice. These statements have not been evaluated by the Food & Drug Administration. This product is not intended to diagnose, treat, cure, or prevent any disease. Consequently, our statements concerning this supplement are for its use by healthy individuals and for educational purposes only.